The key laboratory recently conducted a series of adjustment. Research works are mainly subordinated in two national key disciplinary points, Space Physics and Plasma Physics of University of Science and Technology of China (USTC), combined with other related disciplines, such as Atmospheric Physics, Atomic and Molecular Physics, Physical Electronics and Physical Chemistry. The lab divided into 5 research units, which are Basic Physical Processes in the Near-earth Space Environment, Responses of Near-earth Space Environment to the Solar Activities, Laboratory Research of Space Plasma, Technologies and Researches of Ground-based observations and Space-based Observations.

The Key Laboratory of Basic Plasma Physics (KLBPP), Chinese Academic of Sciences (CAS), is established in 2005. Before the adjustment, it is based on disciplinary points of Plasma Physics and Space Physics of USTC with 3 sub-units: Fusion Plasma Physics, Low-temperature Plasma Physics and Space Plasma Physics. After four years of construction and development, it was evaluated to be good by Chinese Academic of Sciences in 2009, and has got funding support of 1.2 million yuan per year. Along with the development of domestic situation and orientation, government has been increasing supports to disciplines fitting the great strategic needs of the country. To study and forecast the near-earth space environment is becoming more and more important as many space activities is proceeding well, such as manned space flight and lunar exploration program. In this context, under the concern and support of leaderships of USTC and CAS, The lab’s research fields have changed from basic plasma physics to near-earth space environment and its main subordinated discipline has also changed from Plasma Physics to Space Physics. Thus, the lab should be renamed as the Key Laboratory of Near-earth Space Environment. 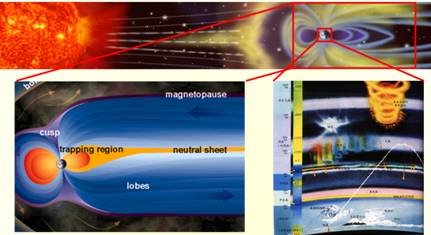 Research fields of the lab after adjustment

The discipline point of Space Physics of USTC is established in 1958, which is the same as establishment of USTC. It is founded by Mr. Zhao Jiuzhang, who is granted award of “missiles plus one satellite Merit Medal” and is the first department chairman. In 1998, discipline of Space Physics of USTC has been granted to have the right to award doctoral. The discipline is evaluated as state-level key discipline in 2002 as the first time, and the second time is in 2007. Companying with Solid Earth Physics of USTC, it is evaluated as the best discipline in all the universities all over the country by ministry of education in 2009. The observation and analysis of geomagnetic activities was the main works in the first two decades after the establishment. Since the 1980s, scientists leading by academician Wang Shui have broadened the research fields. They systematically carried out studies of the solar atmospheric dynamics simulations. Based on their results, they won the second national natural science award in 1993. After 1900s, under the unified arrangements of Wang academician, the discipline had a new strategic layout, which deduced that a group of high level young talents had been trained well and sent to study abroad. Three young scientists have gained the National Science Found for Distinguished Young Scholars of China. Since entering the 21st century, besides training more young talents, the discipline has increased the strength of the introduction of talent. Now it is introduced two talents from USA and Europe separately, who are enrolled in the Centurial Project of CAS, and one talent is enrolled in the Thousand Person Plan of the Organization Department of the Central Committee of the CPC. The discipline has gained more than 50 million yuan research funding over the recent five years. Four persons in the discipline were awarded the National “Top 100 Doctoral Thesis”, which is 80% of all the persons awarded in this field. All the three persons who were awarded the Director Special Award of CAS in Space Physics are in the discipline.

The discipline of Plasma Physics of USTC is established in 1974, the same time when they began to recruit undergraduate, which is the earliest among universities in China. It began to recruit graduate in 1978. In 1981, the discipline became one of the first disciplines have the right to offer degree of PhD and it already had a complete system for training talent studying Plasma Physics through undergraduate, graduate, doctoral to post-doctoral. It is part of the training base of national science foundation research and teaching personnel since 1992 and is evaluated as excellent by Ministry of Education in “95 during”. It is evaluated to be the second of the country (best in all the universities) in the evaluation of academic degree and postgraduate education by the Degree Commission of the State Council. It is evaluated to be the best in the evaluation of doctoral quality by CAS. It became Changjiang Scholars position in 1999. It was selected as the national key discipline in 2001, which is the best in all the discipline of Plasma Physics. It has yielded impressive results in talents training and introducing for a long time. There have been three persons who gained the National Science Found for Distinguished Young Scholars of China and one talent who is enrolled in the Thousand Person Plan of the Organization Department of the Central Committee of the CPC has been introduced in the discipline.

Furthermore, the lab after adjustment also involves many disciplines such as Atmospheric Physics, Atomic and Molecular Physics, Physical Electronics and Physical Chemistry. Now in the lab, there are fixed personnel 40 including scientific research personnel 34, technical support personnel 4 and administrator 2. There are 24 people with senior title, 10 with senior vice title, 2 academicians of CAS, 2 people enrolled in “thousand talent plan”, 6 people gained the National Science Found for Distinguished Young Scholars of China, and 4 people enrolled in the Centurial Project of CAS. There are more than 40 PhD candidates and graduated students separately. 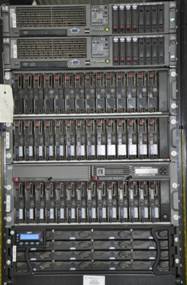 Introduction: Researches of the near-earth space environment in the lab are based on the development of various observation instruments. The main two study methods are analysis of observation data and numerical simulation. Thus, the platform can support data storage, running modes and computer simulations. As the developing of the lab’s platforms, it would gain a mount of observation data of the near-earth space environment. To analysis these massive data (including data from instruments in the lab and data from other related instruments in the world), a large and stable data storage system is required, which can collect, arrange and save all the data obtained. Meanwhile, a large and fast computing platform can offer supports for the accuracy and speediness of running various near-earth space environment modes (including all kinds of atmospheric research mode, particle simulation model and MHD simulation mode). 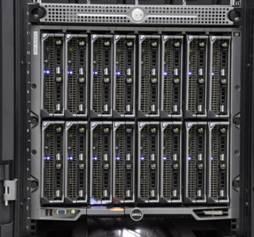 ⑵ Computer Cluster: Each computer node is comprised of 2 CPU (Intel Xeon E5430, 2.66 GHz) with 4 processors. The computer cluster has 8 GB RAM and 16 computer nodes with 128 processors and achieves a performance of 1.36 Teraflops. It is used to running all kinds of modes for the near-earth space environment.